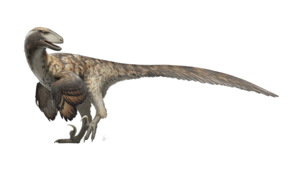 Artistic image of an Ormiold

The Ormiold are a unique species from a human point of view and the reaction during the first time a human saw an Ormiold was dumbfounded astonishment with one or two dropped yaws. Later comparison of Darass DNA with Earthern DNA showed most Darass biota was fact related to Earth biota.

Current speculation has it that the planet Darass has been terraformed in the original sense of the word, about 75 million years ago by an unknown species of non-human sophonts, who then used Earth biota to populate Darass.

In short Dinosaurs were transplanted to Darass by unknown aliens 75 million years ago during the Late Cretaceous.

The Ormiold are the result of the continued evolution of Dinosaurs on Darass and managed to develop interstellar space flight capabilities about 3200 years ago, before their home world was destroyed about 3000 years ago.

The Ormiold rather closely resemble a member of the Family of Dromaeosauridae and it is speculated that they are the descendants of the Dromaeosaurus[1]. The size of the Ormiold can be compared to the Deinonychus[2], with a length of about 3.3 meters, a hip height of 90 centimeters and a weight of about 80 kilograms. They have a larger skull with a shortened muzzle to contain their large brain, but which still contains a powerful yaw and about 70 curved, blade-like teeth. The claws on their three fingered hands are shorter compared to those of their ancestors, while their feet still contain large sickle claws on one toe.

The Ormiold are covered by a layer of symmetric feathers, with long feathers coming from their lower arms and a plume of feathers at the tips of their tails. Their feathers is colored in earth tones, with mostly individual markings in darker or lighters colors.

The Ormiold display sexual dimosphism, and it is possible to externally distinguish males and female of the species. While female Ormiold are rather plain, male Ormiold ossess a plumage of larger head crest feathers in a variety of colors, though usually orange to red coloration, which can be spread out and display various emotions, though they play a great role in their procreation rites.

Due to their ancestry, the Ormiold do not possess a voicebox comparable to humans, but a syrinx, which is closer related to those of avians. This results in languages that are closer to bird song. However the Ormiold syrinx has developed similar to that of various birds that are capable of immitating human speech, allowing them to learn and speak human languages, though with a distinct sound.

Darass biota are fully compatible to Earth biota for consumption, which means that, aside from some little problems[3], the Ormiold are fully able to digest Earth flora and fauna. Generally the Ormiold are a carnivorous species, though they do need to digest some plant matter to deal with deficiencies of vitamins and minerals. Additionally, they are dependent on gizzard stones to support their digestion.

The average life span of the Ormiold is about 78 Earth years.

The Ormiold are a two gendered species and mate for life. Females have an oestrus cycle of 20 days every about 386 days. Following a successful mating, the female will lay up to ten eggs, which she incubates over 143 days, never leaving the eggs in their nest[4] unsupervised for longer than 30 minutes. This incubation remains strong even in modern Ormiold society and males are expected to fully support their mates.

Following a successful hatching, where only two to three eggs even hatch, an Ormiold female is unable to mate for five mating cycles.

Following hatching the Ormiold young remain in their nest for the next five month and are cared for by both parents, during which time they develop far enough to leave their nest, usually following their mothers around, until they can be 'unloaded' to communal caretakers and grow up with the other nestlings of a mating cycle during the work day, while they remain with their family during the rest of the day.

The nestlings remain with their caretakers for the next ten years, where they begin to be educated for their future life in Ormiold society. After these ten years, they begin a training period for communal work for two years[5], before they may enter a higher educational track for higher skilled or academic work. Most Ormiold however receive only basic education[6], though this does not stop them from becoming highly valued parts of their community.

The young Ormiold are considered to become adults when the males develop their head crest feathers with 13 years, and the females enter their first oestrus cycle.

The Ormiold evolved from group hunting ancestors that had already highly developed social rules and skill, even before developing sapience. From Ormiold documents, it appears that the Ormiold ancestors had already developed a form of herding life style of domesticated prey animals during their early evolutionary stages and that this ready supply of food, supplemented by hunting, which may have sped up their evolutionary development towards sapience.

Eventually the Ormiold discovered agriculture, which allowed them to settle down and feed their herds of prey animals. However migration instincs remain strong within the Ormiold mentality and it is not unusual for an Ormiold to move from one city to the next devery couple of years. Due to their group hunting ancestry, they were already inclined towards living in groups and their family groups began to band together into larger communities, the Ontan. Over time the Ontan developed into villages and eventually several Ontan, while remaining separate, settled together into larger towns and eventually cities.

Still, there were large Ormiold groups that kept their migratory nomads, following and protecting their herds of domesticated animals, keeping contact with the city Ormiold and exchanging animals for technologies that eased their life. As such it was not unusual for the Ormiold nomadic groups to make use of vehicles for transportation of their belongings. With the advent of remote telecommunication technologies, the numnber of nomadic groups even increased, as the nomads were very respected for keeping the old way of life. For the entire time of their civilized life, it was not unheard of that some Ontan would send some of their nestlings to life with the nomads to learn their ways.

While the Ormiold are communal, they remain strong individualists and express it in various ways, though mostly through jewelry and other coloring of their plumage. Here it is irrelevant whether the individual is male or female.

As the Ormiold remain predatory sapients, they have channeled their aggression towards constructive means, as well as an active scene for competitive sports, some of which are closely related to their hunting behavior.

In war times, the Ormiold do recognize non-combatants, even though these non-combatants can become combatants. Remains of their initial group hunting behavior leads to more ready submission to the victor of a war, though resistance after the fact is not unheard of.

Ormiold technology has been less advanced than the Quetzal during the Final War, but on par with humanity[7].

Due to their evolutionary history and their physiology, the Ormiold have developed a unique layout for their technology. As there were still large groups of nomadic Ormiold, development of technologies favored simple, rugged and lightweight systems which could easily be repaired and used.

Much like humans the Ormiold have developed various governmental types during their long history, though for the most part they have developed towards a more community driven forms of government.

Due to the still largely pseudo-nomadic nature of the Ormiold, their religions, devided along the Ontan family groups, revolve around the idea of the existence of spirits in all things around them, not unlike early human religions. To the generic Ormiold spirits are a normal part of life, whether these spirits reside within their surroundings, their home and their belongings.

Additionally it is generally believed that once an Ormiold dies, they pass into the spirit world, becoming a spirit to inhabit a part of the area where they have lived. While it is the work of shamans to deal with these spirits, to placate and communicate with them, the believe in spirits is a highly personal matter to the Ormiold. While shamans are important people within Ormiold society, it is not unusual for shamans to have an education in another field, usually the STEM fields.

The belief in spirits is so ingrained in Ormiold society, that teams of scientists and scouts exploring unknown worlds usually include a shaman, who usually has a scientific or technical background, to commune with the spirits of the world they are exploring.

Initially it was thought that there had been no Ormiold on Earth during the short time when the Survivor fleet arrived in Sol, until someone took a closer look at the so-called Sicord Hoax. In 1997 a group of paleantologists discovered a pair of skelletons in Blue Creek Valley that strongly resembled those of Dromaeosaurus, but were larger. Initially hailed as the discovery of a new species of Dromaeosaurae, dromaeosaurus sicordi, problems with dating the finds appeared quickly, such as a number of unknown artifacts found with them, and that they appeared to have been burried. They were labled as hoax at the time, but remained in the National History Museum of Utah, from where they were handed over to their families that had remained in statis and were given a proper burrial in Blue Creek Valley, where they had died 3000 years ago.

Today, the majority of all Ormiold are living on Earth, as they have no problems at all with Earth biota nor the reverse. However, a larger population does live on Ceres. On Earth they have build a currently growing settlement, Darass Istin, in the continental plains of the Midwestern United States. They have introduced several of their domesticated animals [8] as well as their food plants and are largely profiting from the tourist trade, though there is internal resistance at being a large tourist trap.